Have you ever worked with a client and felt their rights had been violated by the government and you wanted to know what more you could do? If you have been in that situation or if it arises in your practice, this blog post may shed some light on some options for your client.

Unaccompanied children (UCs) have rights even if their immigration status in the U.S. has not been sorted out. UCs have Constitutional due process rights. The Flores Settlement Agreement provides protective standards for detention [See CILA’s blog post “Frequently Asked Questions: Who Regulates the Detention of Children Facing Deportation” for more information on the detention of UCs], release, and treatment of minors in immigration custody. Additionally, the Trafficking Victims Protection Reauthorization Act (TVPRA) of 2008 provides the right for UCs to be transferred from U.S. Customs and Border Protection (CBP) to the Office of Refugee Resettlement (ORR) typically within 72 hours for care and further screening. Additionally, UCs have the important right to have their case heard by an immigration judge in removal proceedings rather than being subject to expedited removal procedures. Procedures differ for unaccompanied children (UCs) from contiguous countries (i.e., Mexico and Canada) based on repatriation agreements. In those cases, Customs and Border Protection screen UCs for asylum and trafficking and if these screenings are negative, UCs are sent home.

Unfortunately, UCs’ rights are being violated. A July 2019 Department of Homeland Security (DHS) Office of Inspector General (OIG) report highlighted problems occurring at the border, when kids are held at CBP holding facilities, such as overcrowding, prolonged detention, and lacking access to showers and limited access to change clothes.

It’s important to know in what stage of your client’s story she suffered mistreatment to know where to file a complaint. Often, UCs are apprehended at the border and held in CBP holding facilities before being transferred to the ORR under the Department of Health and Human Services. From there, UCs may be released to a sponsor, placed in federal foster care, or potentially deported. Review this Flowchart to see which agency oversees the portion of your client’s story where the wrongdoing occurred.

Filing a Civil Rights Complaint with Department of Homeland Security

If the harm occurred while your client was held by CBP or detained by Immigrations and Customs Enforcement (ICE) for instance, then you could consider filing a civil rights complaint with the DHS Office for Civil Rights and Civil Liberties (CRCL). CRCL reviews and investigates civil rights and civil liberties complaints involving allegations against the DHS or its employees. Anyone can make a complaint by writing to CRCL. A Civil Rights Complaint form is available in multiple languages on CRCL’s website, and the complaint can be submitted via email, fax, or mail. Use of the form is not required. Generally, a complaint will include the complainant’s contact information, written description of the individual’s circumstances, relevant documents, summary of any other steps taken to resolve the issue, and signed written consent if filed on behalf of someone else.

You may want to consider working with your client to make a civil rights complaint if your legal screening has revealed any of the following violations by DHS:

Example violations could include throwing away UC’s personal property such as a birth certificate or evidence, denying needed medical attention, abuse of authority, or excessive use of force. Other example violations include a transgender individual placed in segregation while in detention and treated wrongfully, or an individual prevented from seeing her attorney. 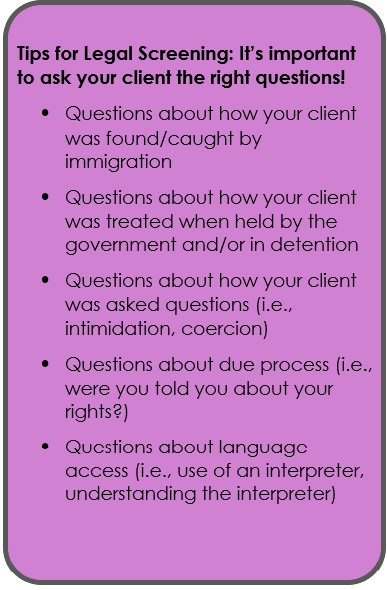 It’s important to know that submitting a Civil Rights Complaint with CRCL likely will not result in a direct remedy for your client because it is not a remedial complaint process unless the complaint is regarding discrimination of an individual with a disability (aka Section 504 complaint).

CRCL has enforcement power when it comes to DHS Section 504 complaints. Discrimination could occur when an agency policy discriminates against individuals with a disability, when a policy is neutral on its face but in application it denies meaningful access to programs for individuals with a disability, or when a program fails to provide a reasonable accommodation for an individual with a disability. Violations could range from intimidation or abusive behavior toward an individual, or harassment that creates a hostile environment, such as name-calling or humiliation. Other violations could occur if an individual is deaf, for instance, and could not hear interview questions, or if a child has PTSD and as result there should have been accommodations when asking the child questions.

For complaints regarding other violations (non-disability related), the CRCL complaint process is still important because CRCL is looking at systems and patterns for problems. In essence, the more complaints they see regarding a problem, the more likely a complaint will be opened and investigated. Bringing violations to CRCL’s attention can help create an environment where there is more accountability and improve procedures and systems in the long-term. As a result, hopefully future instances of mistreatment are prevented from occurring and fewer children suffer.

Tips for Making a Complaint:

Considering Other Alternatives to Achieve Justice for your Client

There are several ways to file a complaint with DHS and you may want to consider completing all avenues relevant to your case.[See ILRC Cases with USCIS and DHS, DHS Complaint Avenues Guide]

Moreover, your client may be able to file a Motion to Terminate or a Motion to Suppress evidence in Immigration Court, depending on the circumstances. [See “Strategies for Suppressing Evidence and Terminating Removal Proceedings for Child Clients” for motions guidance] You might argue that evidence obtained is not reliable or statements your client made were involuntary.

Zoom: Common Criminal Based Inadmissibility Grounds for SIJ in Texas

Past and Future Events